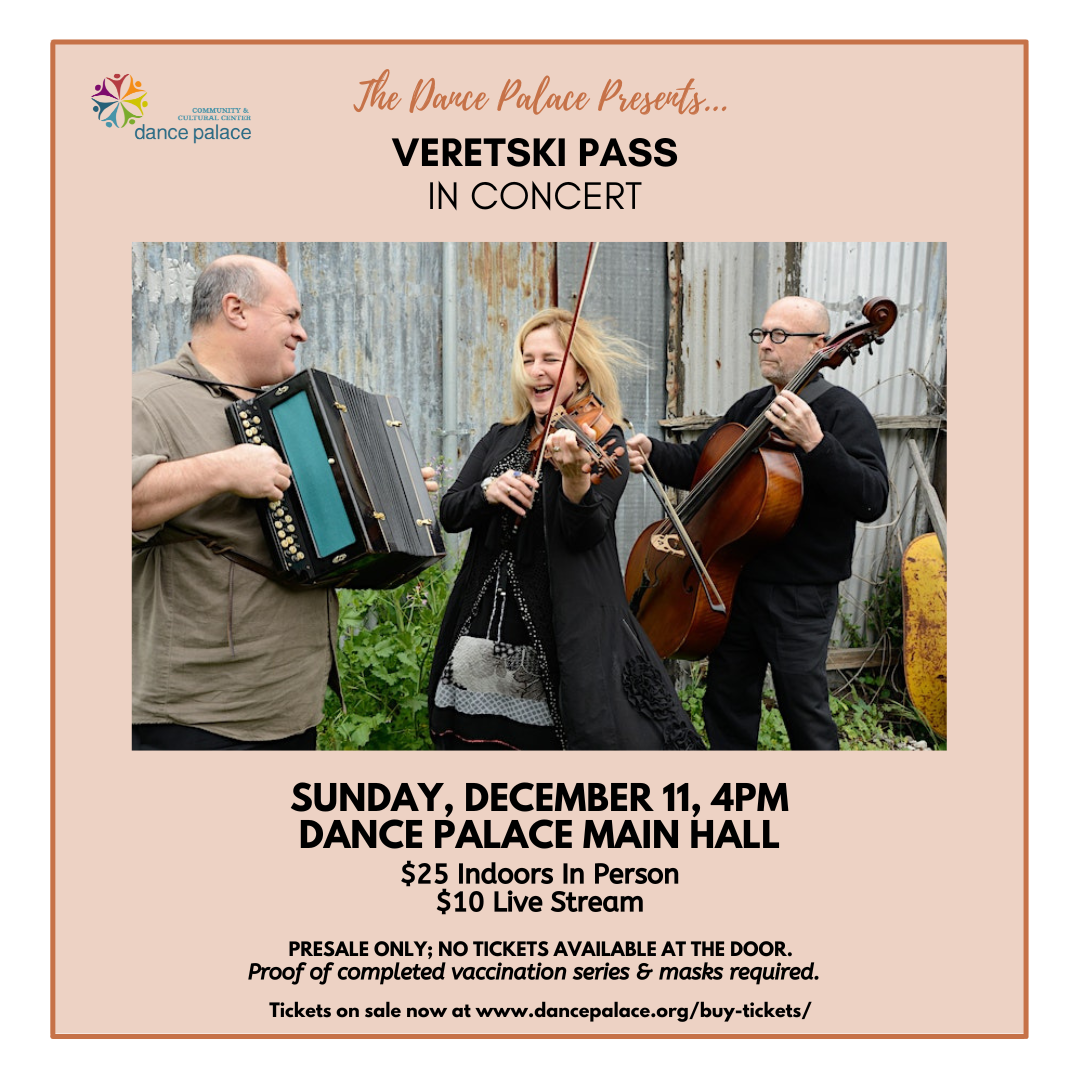 An afternoon concert with Jewish Music veterans who have been at the forefront of the klezmer revival for over 25 years.

Veretski Pass is a trio of Jewish Music veterans who have been at the forefront of the klezmer revival for over 25 years. Their output spans the ultra-traditional to the avant-garde. Taking their name from the mountain pass through which Magyar tribes crossed into the Carpathian basin to settle what later became the Austro-Hungarian Empire, Veretski Pass offers a unique and exciting combination of virtuosic musicianship and raw energy that has excited concertgoers across the world. The trio plays Old Country Music with origins in the Ottoman Empire, once fabled as the borderlands of the East and the West. In a true collage of Carpathian, Jewish, Rumanian and Ottoman styles, typical suites contain dances from Moldavia and Bessarabia; Jewish melodies from Poland and Rumania; Hutzul wedding music from Carpathian-Ruthenia; and haunting Rebetic aires from Smyrna, seamlessly integrated with original compositions. Their CDs have repeatedly been on the 10-best recording lists of journalists since 2002.

Online: Streaming live from the Dance Palace to your home! One streaming ticket per device. $10 per device.

Proof of vaccination is required for all in-person attendees; masks will be required indoors. No tickets available at the door. Streaming ticket sales will end 30 minutes before the start of the show.

Cookie Segelstein, violin and viola, received her Masters degree in Viola from The Yale School of Music in 1984. Until moving to California in 2010, she was principal violist in Orchestra New England and assistant principal in The New Haven Symphony, as well as on the music faculty at Southern Connecticut State University. She is the founder and director of Veretski Pass, a member of Budowitz, The Youngers of Zion with Henry Sapoznik, has performed with Kapelye, The Klezmatics, Frank London, Klezmer Fats and Swing with Pete Sokolow and the late Howie Leess, Margot Leverett and the Klezmer Mountain Boys, and The Klezmer Conservatory Band. Cookie has presented lecture demonstrations and workshops on klezmer fiddling all over the world.

Joshua Horowitz, 19th Century button accordion, Tsimbl (hammered dulcimer) received his Masters degree in Composition and Music Theory from the Academy of Music in Graz, Austria, where he taught Music Theory and served as Research Fellow and Director of the Yiddish Music Research Project for eight years. He is the founder and director of the ensemble Budowitz, a founding member of Veretski Pass and has performed and recorded with Itzhak Perlman, The Vienna Chamber Orchestra, Theodore Bikel, Ben Goldberg, Rubin and Horowitz, Brave Old World, Adrienne Cooper and Ruth Yaakov. His recordings with Veretski Pass, Budowitz, the Vienna Chamber Orchestra, Rubin & Horowitz and Alicia Svigals, have achieved international recognition and he is the recipient of more than 40 awards for his work as both composer and performer.

Stuart Brotman, 3-String Bass, baraban, has been an accomplished performer, arranger and recording artist in the ethnic music field for over 50 years. A founding member of Los Angeles' Ellis Island Band, he has been a moving force in the klezmer revival since its beginning, and has defined klezmer bass (“It’s a large instrument that plays really low and has an accent.”). He holds a B.A. in music with a concentration in Ethnomusicology from the University of California at Los Angeles. Long admired as a versatile soloist and sensitive accompanist in traditional and pop music circles, he has toured and recorded with Canned Heat, Kaleidoscope, and Geoff and Maria Muldaur, and played cimbalom on Ry Cooder’s celebrated recording, “Jazz,” which premiered at Carnegie Hall.

MAIN HALL DOORS OPEN 30 MINUTES BEFORE SHOW START. No tickets will be available at the door; pre-sale only. The streaming option will air live, and will not be recorded for future viewing.

Proof of vaccination is required for all attendees; no exceptions. We are sorry, but those who cannot show proof (original card or vaccination record QR code) will not be admitted to the venue. Thank you for your cooperation.

The development of this site has been funded by grants from the West Marin Fund.

The on-going maintenance of the site depends on your involvement and your financial support. We provide these services free of charge as a benefit to the community. If you appreciate this work, please consider a donation. A small monthly donation of $5, $10, $25 or more per month, from our large membership, will sustain this project. If you've ever benefited from this online community nexus or the local forums, please give your financial support today. For more information please email info@westmarincommons.org. Thanks for your participation.